Having difficulty how to best engage with stakeholders online?  You’re certainly not alone.  We’re all trying to figure it out.

Below are some helpful resources.

The California Environmental Protection Agency (CalEPA) and the California Natural Resources Agency (CNRA) have partnered to produce a series of online sessions The Building Our Skills Together Online Conference during June 2 – 4, 2020, on community engagement and equity during the COVID-19 crisis.

You Are Invited to Join Us in these free online sessions to hear from state, local, Tribal and community leaders as well as international experts in the field of public participation and engagement. Integrated simultaneous interpretation in Spanish will be available. Please see the conference flyers below, available in English and Spanish.

Although this is a three day conference of online sessions, there is no expectation that you must participate in all three days or in all sessions.  Many of the topics covered are intended to assist anyone who would like to learn more about:

HOW CAN YOU PARTICIPATE?
Please register at this link: https://bit.ly/calengage2020.
All sessions are free and online.

For more information or to request a reasonable accommodation, contact Sarah Rubin at Sarah.Rubin@conservation.ca.gov or call  (916) 214-5731.

The Building Our Skills Together Conference is rooted in the experience that many people are going through during this crisis—the struggle to maintain connection in the face of the COVID-19 crisis and the even more pressing challenge to do better when it comes to authentic engagement. The crisis has highlighted once again, the pattern of deepening racial and ethnic inequities across health, the environment and the economy.

From the Local Government Commission:

The current COVID-19 shelter-in-place conditions are shifting much of our work and engagement to virtual settings.

To help you and your community adapt to these new circumstances, LGC has developed the following guide to Virtual Engagement Best Practices.

This 12-page guidebook walks you through some of the most important considerations in developing your virtual engagement event, highlighting some of LGC’s lessons learned through our 35+ years experiencing connecting leaders and engaging communities.

We hope this guide will help you and your community develop more effective, interactive virtual events during this unprecedented time. Please share this resource broadly with your networks.

Click here for the Guide to Virtual Engagement Best Practices. 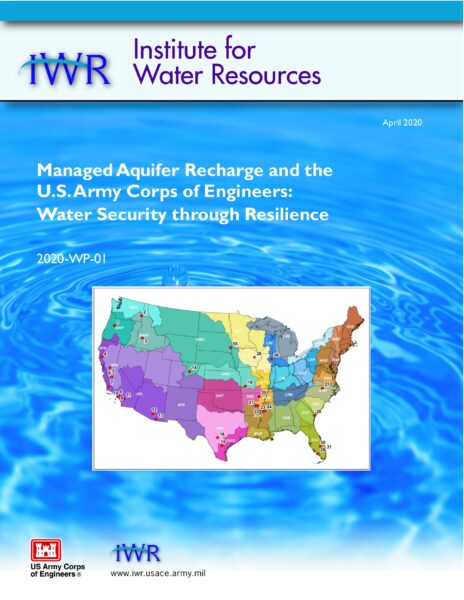 With the water needs of society increasing and becoming increasingly diverse, water management and planning are more challenging than ever. Water security in all its forms is as important, but seems progressively difficult to achieve. Additional water storage and flood risk management is needed, but major new surface infrastructure projects seem unlikely.  Water storage underground (managed aquifer recharge, or MAR) is an alternative to augment surface storage and increase resilience of USACE projects while improving the Nation’s water security.

MAR is a term that covers artificial recharge, aquifer storage and recovery, riverbank and riverbed filtration, groundwater banking, and other mechanisms of purposeful water recharge to aquifers for later recovery.  MAR use has grown rapidly over the last two decades, progressing from an often-experimental concept to a management tool used in over 1000 sites around the world.

The U.S. Army Corps of Engineers (USACE) and its partners have engaged, or considered engaging, in the use of MAR in a variety of settings and purposes, throughout the United States. These purposes include:

This report examines how MAR has been, is being, or could be used in conjunction with USACE Civil Works water resources projects. The report summarizes some of USACE’s authorities for using MAR, provides numerous examples of USACE activities involving MAR, reviews the experience of other US government agencies and Departments, and considers how MAR can be integrated into the USACE civil works planning process and new initiatives.

The report is available for free download from the IWR Library.

From the University of California Riverside:

Grasslands across the globe, which support the majority of the world’s grazing animals, have been transitioning to shrublands in a process that scientists call “woody plant encroachment.”

Managed grazing of drylands is the most extensive form of land use on the planet, which has led to widespread efforts to reverse this trend and restore grass cover due to the belief that it results in less water entering streams and groundwater aquifers.

A new study led by Adam Schreiner-McGraw, a postdoctoral hydrology researcher at the University of California, Riverside, modeled shrub encroachment on a sloping landscape and reached a startling conclusion: Shrub encroachment on slopes can increase the amount of water that goes into groundwater storage. The effect of shrubs is so powerful that it even counterbalances the lower annual rainfall amounts expected during climate change. 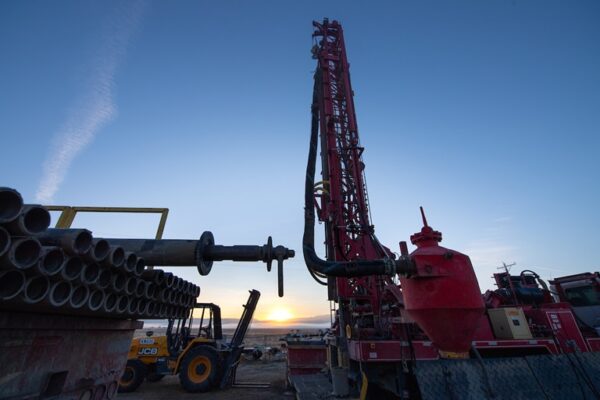 To help fill in this missing information, the Department of Water Resources (DWR) works with local water agencies to install groundwater monitoring wells. Unlike water production wells, monitoring wells do not remove groundwater, but instead use one or more small diameter pipes placed anywhere from 50 feet to 2,000 feet deep. The pipes house electronic equipment that continuously measures groundwater level information. Groundwater samples can also be manually collected from these wells to check for water quality.

WANT TO KNOW MORE?  Check out DWR’s Technical Services, which includes monitoring well installation, geophysical logging, geologic logging, groundwater level monitoring training, borehole video logging, and other field activities – and can even be at no cost to qualifying GSAs.  Go to this page and click on the Technical Services tab.

Read more meeting coverage and sign up for email service at WaterWrights.net 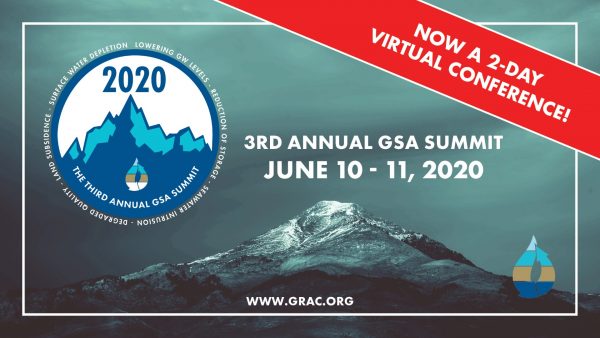 The Third Annual GSA Summit, now a virtual event held June 10-11, is an opportunity to celebrate a significant milestone with the first round of GSP submittals (due at the end of January) and to exchange information, ideas and best practices for successful GSP development and implementation.

This year’s discussion sessions will include new information and approaches to topics such as:

Keynote speakers from State Board and DWR will provide reflections on the SGMA legislation development and implementation and provide insights on future program developments.

WEBINAR: Resilience from Below: Proactively Managing Groundwater to Sustain Communities and Nature in an Uncertain Future

In his David Keith Todd Distinguished lecture for 2019, Maurice Hall will share his vision on how more holistic and inclusive groundwater management can increase the resilience of our water supply and sustain and enhance the services that groundwater basins provide for a wide range of stakeholders.

Maurice will share some suggestions on how the flexibility offered by California’s Sustainable Groundwater Management Act allows for innovative approaches that support multiple benefits and how engaging stakeholders beyond water interests in shaping groundwater management can lead to more resilient rural communities and strengthen regional cooperation.

The course reviews the concepts of groundwater flow and transport, and of finite difference and finite element methods. It then provides an overview of various software programs for groundwater flow and transport modeling and accompanying pre- and post-processing programs. The course includes hands-on exercises based on the USGS MODFLOW flow model and MODPATH and MT3D transport models.

From the State Water Board:

If you have any questions, please contact us at gwquality.funding@waterboards.ca.gov, Subject Line: Prop 68 Groundwater Treatment and Remediation Grant Program SDAC Proposal Solicitation.

SGMA in the news

Feds say Tule groundwater could continue to sink:  “Without the construction of the 152-mile Friant-Kern Canal in 1951 at the cost of $61 million, many of the best producing ag areas along the east side of the San Joaquin Valley would be out of business. That’s because farmers had pumped themselves dry by the late 1940s. Productive citrus growing areas like Orange Cove, Lindsay and Terra Bella have little groundwater available to this day.  The canal serves farms and communities from Chowchilla in the north to Arvin Edison near the Grapevine in the south. Its waters boost the area’s economy to the tune of millions of dollars.  As the Valley moves forward on sustainable groundwater monitoring plans and proposed pumping restrictions by district, the gravity-fed canal that is key to survival for 15,000 east side farms continues to be impacted by subsidence. ... ” Read more from the Foothills News-Gazette here: Feds say Tule groundwater could continue to sink

Nut of the Future? With droughts inevitable, more farmers are switching from almonds to pistachios, but not everyone is happy about it:  “Rain scarcely fell in the San Joaquin Valley in 2013, the second year of California’s five-year drought and one of the driest years in the state’s recorded history. For Sarah Woolf and her family, growers of tomatoes, vegetables, grapes and almonds, these unprecedented conditions, coupled with new restrictions on groundwater pumping, prompted a shift of gears: They would plant drought-hardy pistachios. … ”  Read more from Comstock’s Magazine here:  Nut of the Future?

With water availability being an important concern, water managers often use water budgets to quantify and manage water resources.  A water budget is an accounting of the rates of the inflows, outflows, and changes in water storage in a specific area; however, as simple as that might sound, developing an accurate water budget can be a difficult and challenging endeavor.

Groundwater: The charge to recharge needs to be data driven

In the world of groundwater recharge, not all dirt is created equal.

Where, when, how much and how fast water can best be recharged into our depleted aquifers has become a critical question in the Central Valley.

A new tool aims to help answer those questions at the field-by-field level or up to an entire county.

The Groundwater Recharge Assessment Tool, or GRAT, was spearheaded by Sustainable Conservation, a nonprofit group that works to find collaborative solutions to some of California’s thorniest problems, including water and land use in the valley. It worked with Earth Genome, an environmental data crunching group, to develop GRAT.