Can sensor data save California’s aquifers?

“In California, the amount of water exiting aquifers under the state’s most productive farming region far surpasses the amount of water trickling back in. That rampant overdraft has caused land across much of the region to sink like a squeezed out sponge, permanently depleting groundwater storage capacity and damaging infrastructure.

The trend—and a 2014 mandate for sustainable groundwater management in the state—has ignited interest in replenishing aquifers in California’s Central Valley through managed flooding of the ground above them. But until now there has been no reliable way to know where this type of remedy will be most effective. … ”

“A report from a citizen advisory committee in Desert Hot Springs is asking lawmakers in Sacramento to “re-work” a state law, which went into effect in 2015, that allowed the Desert Water Agency in Palm Springs to take over management authority of the groundwater distributed by the Mission Springs Water District, to people living in Desert Hot Springs and surrounding areas.

That 2015 law, called the “Sustainable Groundwater Management Act” is designed to use local water agencies for the first time, to help the state control and account for the use of groundwater in California. … “

Owens Valley Groundwater Authority one step away from adding board seats

““Fast paced” and “Owens Valley Groundwater Authority meeting” have never appeared in the same sentence in the year-and-a-half since the Authority was formed. But, Thursday’s session was different, in large part due to the hours of wrangling, discussion and closed sessions that preceded it.

The board members approved agreements with entities’ staff and consulting services from Bob Harrington.

In addition, hold onto your hats, the board came to a consensus on how to allow additional board seats. The final vote will come at its May 23 meeting. So, it’s not a done deal, but it’s very close. … ”

Read more from the Sierra Wave here:  Owens Valley Groundwater Authority one step away from adding board seats

“At the Indian Wells Valley Groundwater Authority meeting Thursday, the board heard the latest about its water marketer, the Capital Core Group.  General Manager Don Zdeba reported that since the last board meeting the agreement with Capital Core has been executed and signed.  Water Resources Manager Steve Johnson of Stetson Engineers reported that Stetson has been coordinating with Capital Core as well. … ”

Presentation reviews the GSA fee authorities granted in SGMA, looks at the various fees enacted by some GSAs, and a case study of how one GSA set their fees

At the American Groundwater Trust conference held in February, 2019, Attorney Jena Shoaf Acos reviewed the statutory provisions of SGMA as it relates to GSA fee authorities; Attorney Mack Carlson reviewed the fees that have been put in place by other GSAs; and fee consultant Mark Hildebrand walked through a case study of how a GSA determined what fee they would charge. 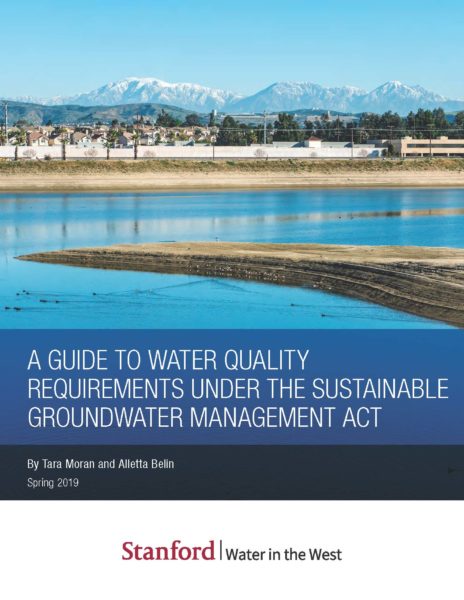 A report released today from Stanford’s Water in the West program and funded by the Water Foundation provides GSAs with a resource to guide them through their responsibilities regarding groundwater quality under SGMA. … ”

The State Water Board has released new fact sheets on the following topics to assist with implementation of SGMA:

These fact sheets, as well as a cover letter transmitting this information to the groundwater sustainability agencies, are available at the following website: https://www.waterboards.ca.gov/water_issues/programs/gmp/sgma.html.

The Central Valley is sinking as farmers drill for water. But it can be saved, study says

“A team of Stanford University researchers believe they have identified the best way to replenish the shrinking aquifers beneath California’s Central Valley.  The groundwater beneath the Central Valley has been steadily depleting, particularly as the state’s $50 billion agricultural industry relied on it during a series of droughts. Each year, more water exits the aquifer than goes into it.

The study from Stanford’s School of Earth, Energy and Environmental Sciences, published in the journal Water Resources Research, found that unless action is taken, the ground in that region will sink more than 13 feet over the next 20 years. … ”

Read more from the Sacramento Bee here:  The Central Valley is sinking as farmers drill for water. But it can be saved, study says

“The Indian Wells Valley Water District took some time during its board meeting Monday night to discuss the Groundwater Authority’s feelings on the approaching deadline for the groundwater sustainability plan while giving general updates on public outreach and bulk water station upgrades.

During a meeting last week, the Groundwater Authority’s policy advisory committee expressed concern with the timing of the completion of the GSP — due to the state by the end of January 2020. … ”

“Facing a wave of opposition over proposed fees for using well water, the directors of a little-known public agency backed away from a decision Thursday and agreed to consider an alternative plan that would exempt rural residents and cost other groundwater users far less overall.

Irate residents blistered the Santa Rosa Groundwater Sustainability Agency’s board of directors with complaints over the inequity and underlying principle of the plan to make residents, ranchers, businesses, towns and cities pay — for the first time — for water pumped out of the ground. … ”