Sierra Ryan is a water resources planner with the County of Santa Cruz.  In this presentation from the Groundwater Resources Association‘s 2019 Western Groundwater Congress, Ms. Ryan tells the story of how the Santa Cruz Mid-County Groundwater Agency balanced the various perspectives, authorities, and interpretations of the DWR regulations in writing the portion of their Groundwater Sustainability Plan that pertained to the depletion of interconnected surface water (sustainability indicator or undesirable result #6).

“I promise you that it was not as simple as we thought it was to begin with, so for those of you in the medium and high priority basins that have the 2022 deadlines, I hope you’re thinking about this now,” Ms. Ryan advised. 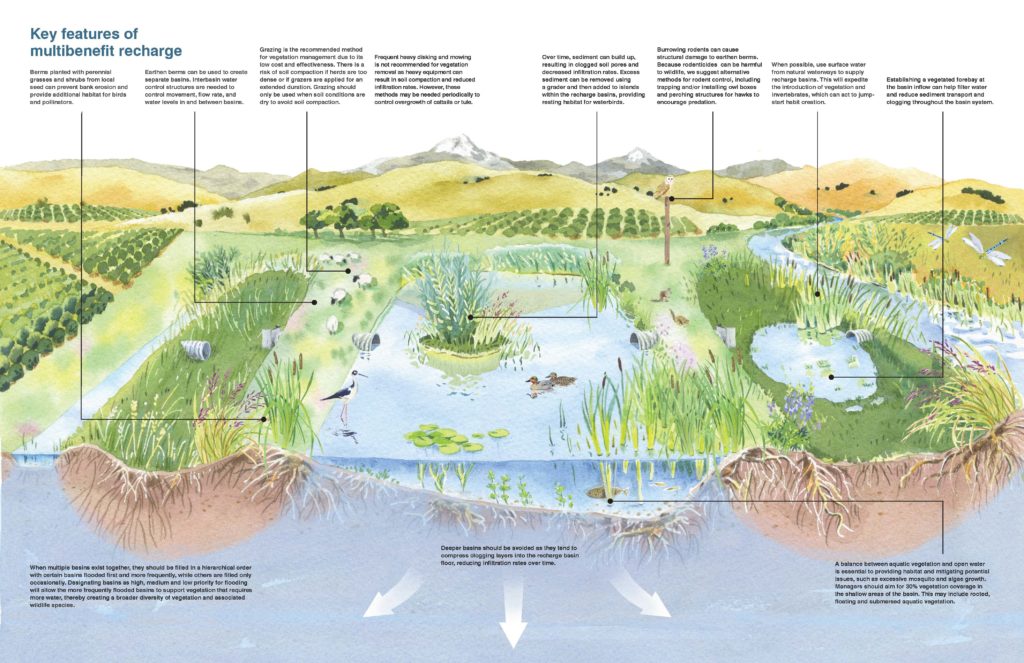 “I wasn’t expecting to see egrets, herons and pelicans on my first trip to the San Joaquin Valley — a region in the southern part of California’s Central Valley known for its impressive agricultural production and scorching summer heat. I didn’t find these birds at one of the valley’s few wildlife refuges, but at a groundwater recharge facility designed to spread and infiltrate surface water into the ground below.

Recharge basins are becoming increasingly popular in overdrafted regions in California, where water managers are seeking solutions to balance groundwater supply and demand to comply with the state’s Sustainable Groundwater Management Act (SGMA). … ”

SGMA IMPLEMENTATION: David Orth gives his observations on how sustainable groundwater management is playing out in the San Joaquin Valley

David Orth is the principal of New Current Water and Land, which offers strategic planning, program implementation, and water resource development services.  At the California Irrigation Institute’s 2020 Annual Conference, he gave his observations on how implementation of the Sustainable Groundwater Management Act (SGMA) is progressing, having watched Groundwater Sustainability Agencies (GSAs) form and develop their Groundwater Sustainability Plans (GSPs) since the passage of the SGMA in 2014.

New Current Water and Land is a small strategic planning shop that combines experience in water engineering, finance, district management, and water law to create a strategic planning platform.  Their clients are from the farming community, the investment community, and the lending community.  They also work with one environmental NGO.  Over the last several years, they have monitored over 60 GSAs on behalf on that client base in over 40 subbasins, including about 15 of the 21 subbasins that are considered critically overdrafted.

“Through the course of that, we’ve provided a general risk assessment for our clients by area so they can understand where they really need to pay attention as GSPs are developed in the policy engagement arena,” he said.  “Then we extrapolated that into long-term forecasting of what individual ranch water budgets are going to look like upon full implementation of SGMA.  This has assisted our ag clients in making decisions about redevelopment or acquisition or disposition in how to deal with the new variable that SGMA creates.”

GUEST COMMENTARY: Significant progress being made in implementing the state’s groundwater law

“I remember being surprised when attending a local Groundwater Sustainability Agency meeting and I first saw a schematic that visually depicted the various levels of groundwater underneath one of the Central Valley’s numerous subbasins. There was a horizontal line going across the chart that said “base of freshwater”.  Beneath the freshwater line there was another line labeled “top of basement”.  I asked the subbasin hydrologist about what occupied the space between those lines and he explained that it was ancient salt water that occupied the lowest depths of the aquifer.  He said a study done decades ago had identified that the salt water was there, but they were now guessing about exactly where, because other than that one study done many years ago, no one had a reason to drill down into it to attempt to characterize it.  Why does this matter? If you are going to estimate how much fresh water is contained in a groundwater basin, you need to know how deep it is.

This story is just one example of what has been going on in the Central Valley over the past few years since the adoption of the Sustainable Groundwater Management Act (SGMA) by California in 2014. … ”

We measured on-farm crop water use and conducted grower interviews to estimate the agricultural water demand in the upper Russian River and Navarro River watersheds. Annual agricultural water demand was less than 11% in the Russian River, and 2% in Navarro River, of the total annual discharge in each watershed. However, because demands are concentrated in the dry season when instream flows are at a minimum, these relatively small amounts can represent a significant constraint to stream habitat conditions.

We have shared our study results in broad basin and community water resource planning efforts, including flow management of the Russian and Navarro rivers and implementation of the Sustainable Groundwater Management Act in the Ukiah Basin.

Findings and recommendations from this study have influenced on-the-ground solutions to meet water demand in these watersheds, including construction of off-stream wintertime storage capacity to replace summertime stream diversions, and use of a municipal recycled water conveyance system as a replacement for summer diversions.”

California’s climate is the most variable of any state, historically swinging from dry to flood conditions with climate change intensifying these swings. Although three of the last four water years have been above normal with 2017 and 2019 standing out as some of the wettest on record, the last decade has had a majority of the years below normal precipitation and include the timeframe of the state’s most recent drought.

Although Spring 2019 groundwater levels have mostly recovered from the past one to three years, they have not fully recovered to pre-drought conditions throughout the state as shown in the five- and 10-year time periods. At this time, there is insufficient data coverage to determine the long-term effects of the drought in some subbasins throughout the state; however, since CASGEM reporting requirements began in 2011, statewide data coverage has improved in most areas except for data gaps in Tulare, Kern, San Bernardino, Riverside, and Imperial counties. 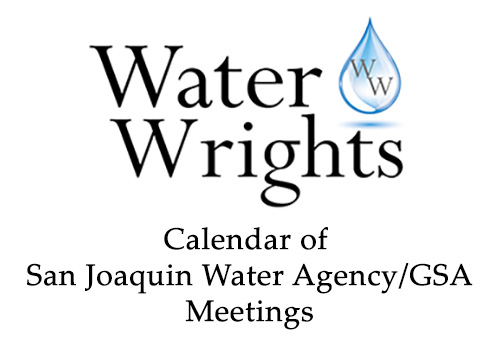 Read all articles at WaterWrights.net.

Water UCI, an interdisciplinary center at the University of California, Irvine, has organized a survey of California water and groundwater agencies and stakeholders. This information will be used to help inform the preparation of a workshop on “Strengthening California’s Groundwater Resilience in the context of Climate Change: Governance, Policy, and Economics” to be held by Water UCI in June 2021. The June 2021 workshop will be a follow-up to the June 2019 California-European Union workshop on Sustainable Groundwater Management and Conflict Resolution.

From the Department of Water Resources, Sustainable Groundwater Management Office:

The Department of Water Resources (DWR) is focused on ensuring continued operations while modifying the way we work in the face of the coronavirus to maintain critical functions and protect our staff. DWR staff supporting the Sustainable Groundwater Management Program continue to work and are available to answer questions and provide assistance via email, phone, and web-based meetings.

New subsidence information covering the period of June 2018 to September 2019 has been added to the SGMA Data Viewer under land subsidence. This information can help groundwater sustainability agencies (GSAs), water managers and the public implement the Sustainable Groundwater Management Act (SGMA).

The Department will hold a 15-day public comment period on the draft Basin Prioritization for these two basins. Email comments to sgmps@water.ca.gov by April 8, 2020.

Due to ongoing health and safety concerns, DWR is extending its original GSP public comment periods by 30 days. The new deadlines are May 15, 2020, and June 3, 2020.

DWR encourages public comment on recently submitted plans that show how local water agencies plan to manage groundwater basins for long-term sustainability. Comments can be posted online on the DWR SGMA Portal and a SGMA Portal account is not necessary.

Information about how to comment on a plan can be found in fact sheets in English and Spanish.

Due to ongoing health and safety concerns, DWR will accept annual reports for the prior water year after the April 1, 2020 deadline from basins with adopted GSPs, approved and pending alternatives to GSPs, and adjudicated areas. The reports can be viewed by the public once they are submitted on the SGMA Portal. The reports provide information on groundwater conditions and management activities for the prior water year.

Downloadable templates for basin-wide data are available on the GSP Reporting System webpage and must be submitted with the annual report. For questions or more information, email GSPSubmittal@water.ca.gov.

Alternative Annual Reports will be submitted the same as previous years using the Alternative Reporting System. For questions or more information, email GSPSubmittal@water.ca.gov.

DWR has designated Basin Points of Contact to assist local agencies and GSAs as they develop and implement their plans and to assist with applications for Technical Support Services and Facilitation Support Services.

SGMA News from around the state

Groundwater management is a team effort at DWR:  “In California, groundwater is a precious resource that supports the health of our communities, the economy, and the environment.  Groundwater is critical to ensuring a more resilient water future for California, explained Taryn Ravazzini, Deputy Director, Statewide Groundwater Management, with the Department of Water Resources (DWR). Not only does it represent more than half of the state’s water supply in dry years, it is the only source of drinking and irrigation water for many communities, she added. … ”  Read more from DWR News here: Groundwater management is a team effort at DWR

Sustaining Pajaro Valley’s Water:  “The Pajaro Valley enjoys a temperate microclimate, in part because it is situated at the hip of Monterey Bay. It lays like an east-west-oriented horseshoe, with the open end settling around the coastal plains of Elkhorn Slough and its various tributaries and side sloughs. Rimmed by the Santa Cruz Mountains to the north, the Gabilan Range to the south, and the San Andreas Fault at its head, the Pajaro Valley is a unique place in California.  Marks from the state’s past — traces of the indigenous creekside camps to the Mission landmarks and Gold Rush-era place-names — tell part of the valley’s story. Unlike in neighboring areas that have embraced the commuting car culture, the endless lines of perfectly aligned row crops reveal that this valley is still very much a working landscape. … ”  Read more from Estuary News here: Sustaining Pajaro Valley’s Water