Under natural conditions, it is the seaward movement of freshwater that prevents seawater from encroaching on coastal aquifers.  However, when groundwater is pumped from a coastal aquifer, the lowered water levels can cause seawater to be drawn toward the freshwater zones of the aquifer.

Quantifying the extent and rate of seawater intrusion is key to sustainable management and use of groundwater resources.

For more information, click here to visit the USGS webpage for seawater intrusion. 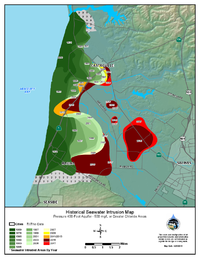 Seawater intrusion into the Salinas Valley aquifers has advanced since it was first measured in 1944.  In 2014 elevated salinity levels were recorded less than 1/2 mile from the city of Salinas and was beginning to encroach beyond the limits of Castroville, CA.

Maps from 2018 indicate that these elevated salinity levels may have increased. The extent of seawater intrusion has moved farther inland due to continuing overdraft conditions for municipal and agricultural uses.

The Monterey County Water Resources Agency monitors the movement and extent of seawater intrusion by testing a series of wells located in the coastal northwestern portion of Monterey County.

Other sources of information:

Seawater intrusion due to heavy groundwater extraction was identified as a problem in Southern California by the early half of the 20th century.  In the 1950’s, construction began on the first of three “barriers” in an attempt to halt saltwater intrusion. Each barrier consists of a series of injection wells that essentially form a subsurface wall of freshwater designed to keep saltwater from penetrating further into aquifers.