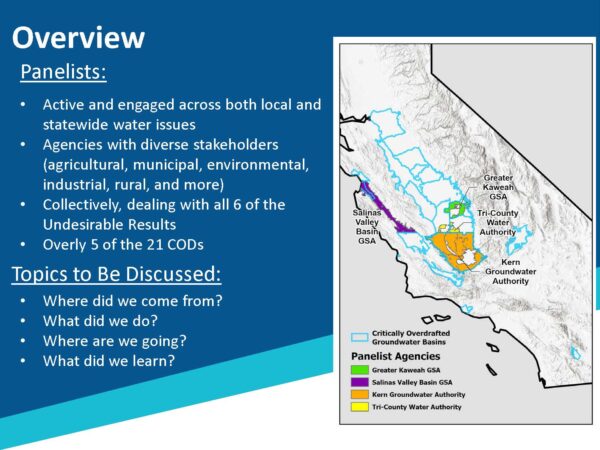 The implementation phase of the Sustainable Groundwater Management Act has now begun for the basins designated as critically-overdrafted. Getting to this point has been an unparalleled journey as communities, farmers, water suppliers, and others navigated through uncharted territory to develop local solutions for sustainable groundwater management. At the Groundwater Resources Association Third Annual Groundwater Sustainability Agency Summit held online in June, a panel of managers from four of the critically overdrafted basins reflected on the hard work of developing and adopting a groundwater sustainability plan.

Seated on the panel were Gary Petersen from the Salinas Valley Basin GSA; Eric Osterling from the Mid Kaweah GSA; Deanna Jackson from TriCounty GSA; and Patricia Poire from the Kern Groundwater Authority.  Collectively, these GSAs are having to deal with all six of the undesirable results, from subsidence to groundwater levels to seawater intrusion, and they overly five of the 21 critically overdrafted basins.

Each panelist then discussed the process that they went through in developing their plans, the lessons they learned, and their advice for those developing the plans that will be due in January of 2022.