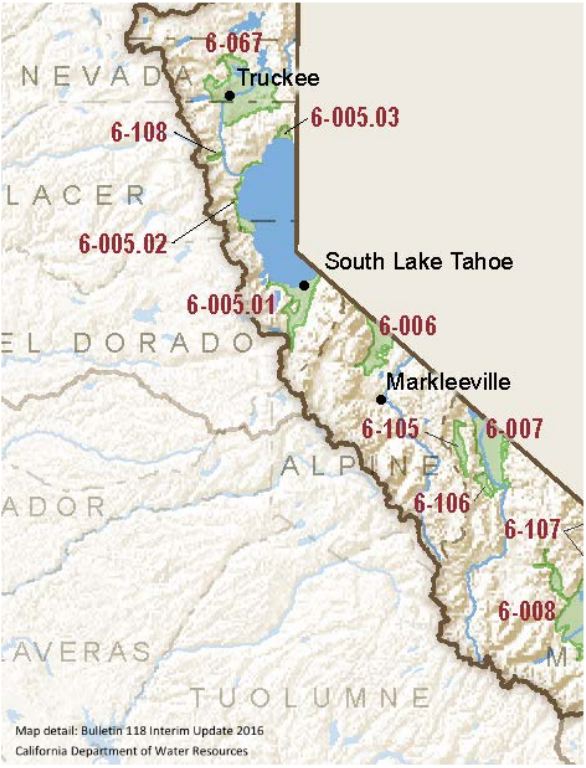 2014: CASGEM basin prioritization – medium. Comment: South Tahoe Public Utility District reports that MTBE has had a major impact on the groundwater within its service area, resulting in 12 of 34 production wells unusable and the destruction of two wells (B-118), (Berghson 2000)

Comments from 2018 Final Basin Prioritization:  The south “Y” Plume has impaired three PSW (LBWC #3, #5, and TKWC #2) with a combined source capacity of 3.25 MGD. Trace levels of PCE below MCLs is presently detected in one PSW well (TKWC#1); however, PCE concentrations have been steadily increasing in this well during the 2016 WY. Potential impairment of TKWC #1 would further reduce the total production capacity of the area drinking water sources by an additional 1.44 MGD. Two other wells (LBWC #1 and TKWC #3) west of the South “Y” plume are presently non-detect for PCE; however, the combined source capacity of these two neighboring wells is 3.82 MGD and is believed to be at risk for groundwater contamination in the future. This a major challenge for the management of groundwater resources of the basin. Competition for funding and resources for containment/clean-up and a slow but increasing reduction in groundwater storage due to plume expansion puts increasing pressures on sustainability.