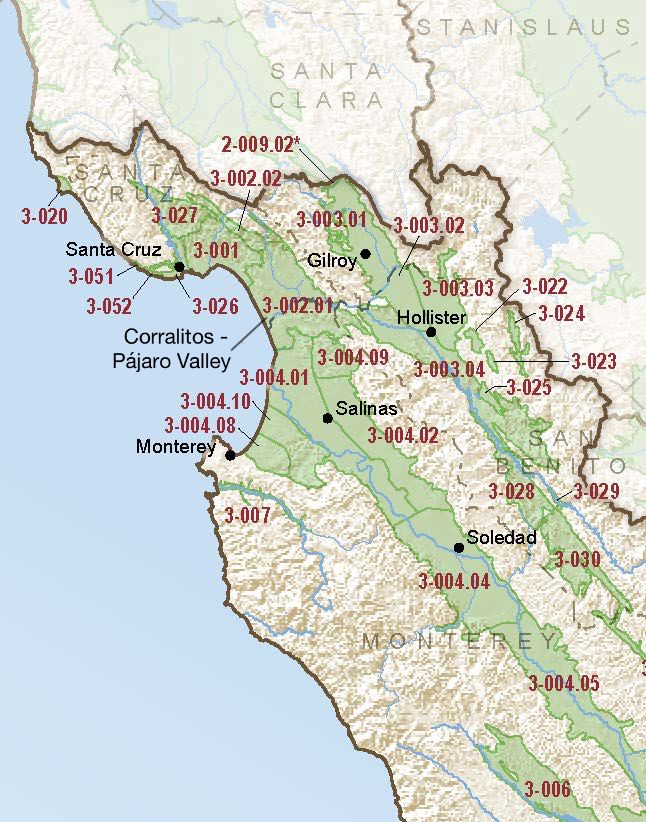 Located in California’s Central Coast hydrologic region, the Corralitos – Pájaro Valley is 75,055 acres in size. This High priority basin is home to an estimated 90,289 people (2010 value), which have been at a rate of 11.02.

The current seawater intrusion rate in the Pajaro Valley is estimated to be 100 to 250 feet per year, and its effects already extend several miles inland (PVWMA, 2014A). …In April 2014, the Pajaro Valley Water Management Agency Board of Directors adopted a Basin Management Plan update. The plan proposes six projects and an aggressive conservation program that will reduce groundwater over pumping by 90% and essentially halt seawater intrusion into the Pajaro Valley Aquifer (PVWMA, 2014B). Source: CentralCoastGWReport-Aug2014.pdf 2) Today, the need to abate groundwater overdraft and prevent further seawater intrusion into the coastal aquifer drives the PVWMAs conjunctive use and groundwater management program. Beginning in the early 1990s, the PVWMA started establishing a water supply system that today combines surface, groundwater, and recycled water to sustain valley farms and work to recharge declining groundwater aquifers. The Agency still has much to do, and in its ongoing basin management planning efforts, is working alongside university researchers, as well as with local stakeholder groups to develop the most cost-effective and efficient programs and projects. Source: PajaroValleyGWM.pdf