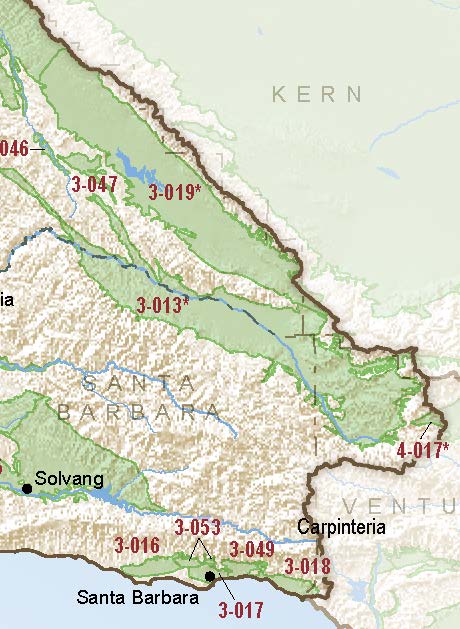 Located in California’s Central Coast hydrologic region, the Carpinteria subbasin is 8,120 acres in size. This high-priority basin is home to an estimated 13,040 people (2010 value). The basin has approximately 42 wells.

2008: DWR:It is noted that during this 10-year period since 1998 (i.e.,1999 through 2008), the annual average rainfall was 16.8 inches, which is approximately 15 percent less than the longterm annual average of 19.8 inches. During this period, however, annual groundwater pumping averaged only approximately 3,600 afy, which is approximately 20 to 30 percent less than the previous estimates of basin yield that range between 4,500 to 5,000 afy. The observation that water levels gradually declined under these conditions of recharge and pumping suggests that previous estimates of basin yield may have been overestimated. The results of the change in groundwater storage calculations are summarized below:  Fall 1984 through Fall 1991: 15,988 acre-feet of storage depletion; Fall 1991 through Spring 1998: 17,661 acre-feet storage increase; Spring 1998 through Fall 2008: 5,879 acre-feet of storage depletion. Source: 06-0125_TechMemo_Task1_20120221.pdf

2011: Groundwater levels in most of the basin, based on springtime measurements of water levels in qualified wells, are above sea level. A pumping depression exists in the central portion of the basin, with water levels as deep as about 15 feet below sea level and several feet below sea level at the coast, a condition that could allow sea water intrusion; however, there has been no documented evidence of seawater intrusion in the basin. Based on current data (Fugro, 2011), and CVWD’s ability to conjunctively use imported surface water from the Central Coast Water Authority (i.e., State Water Project), and local surface water from Lake Cachuma, annual groundwater demand is, on average, about 1,400 AFY less than the estimated safe yield of 5,000 AFY. Source: Santa Barbara County Groundwater Report