From the Cornell University Chronicle:

“Despite higher-than-normal amounts of rain in early 2017, the large agricultural and metropolitan communities that rely on groundwater in central California experienced only a short respite from an ongoing drought.

When the rain stopped, drought conditions returned and the ground has continued to sink, by up to a half-meter annually, according to a new Cornell study in Science Advances. … “

From the Business Journal:

“Groundwater sustainability agencies (GSAs) in Tulare, Fresno, Kings and Kern counties have until 2020 to develop plans for long-term viability of their regions’ supplies.  In other California counties where state officials deem the groundwater overdraft problem less critical, their GSAs will have until 2022 to finalize their plans.

Once those plans are done, the various groups will have 20 years to implement them, with a common goal of halting in their areas the overdraft of groundwater.

The law requiring these plans, the Sustainable Groundwater Management Act (SGMA), already is having a big effect on prices for agricultural land, particularly in the areas from Madera County down to Kern county, where some of the most severe over drafting in the state commonly occurs. … “

Read more from The Business Journal by clicking here. 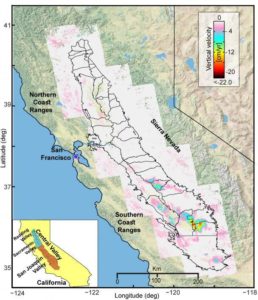 The availability of water from underground aquifers is vital to the basic needs of more than 1.5 billion people worldwide, including those of us who live in the western United States. In recent decades, however, the overpumping of groundwater, combined with drought, has caused some aquifers to permanently lose essential storage capacity.

With the hope of providing water resource managers with better tools to help keep aquifers healthy, a team of scientists from Arizona State University and the Jet Propulsion Laboratory (JPL) are using the latest space technology to look underneath Earth’s surface to measure this precious natural resource.

They’ve focused their efforts on one of the world’s largest aquifer systems, located in California’s Central Valley, measuring both its groundwater volume and its storage capacity. The results of their most recent findings in this groundbreaking study have been recently published in Water Resources Research.

The bottom is falling out of America’s most productive farmland.

Swaths of the San Joaquin Valley have sunk 28 feet — nearly three stories — since the 1920s, and some areas have dropped almost 3 feet in the past two years.

Blame it on farmers’ relentless groundwater pumping. The plunder of California’s aquifers is a budding environmental catastrophe that scientists warn might spark a worldwide food crisis.

“This is not sustainable,” said Jay Famiglietti, a senior water scientist at NASA’s Jet Propulsion Laboratory. “If those aquifers continue to be depleted and if we start running out of water in these big aquifer systems, the global food system is going into meltdown mode.”

From Jelena Jezdimirovic at the PPIC Blog:

“The San Joaquin Valley is ground zero for groundwater management challenges. While agriculture is the region’s predominant water user, its cities are more likely to rely on groundwater as their primary source of water. For this reason, the urban sector will need to play a bigger role in the regional effort to balance groundwater use and replenishment.

Our recent research indicates that cities in the valley lag behind agricultural districts in the intentional recharge of groundwater. That’s primarily because most have limited access to two things necessary for storing more water underground: extra surface water and unpaved land on which to spread it so it can percolate into the ground. But some cities have had success with recharge activities. Here are three methods that can serve as models. … “

Continue reading at the PPIC Blog by clicking here.

From Ellen Hanak at the PPIC Blog:

“When strong winter rains finally ended the recent five-year drought, many water districts seized the opportunity to recharge depleted aquifers. How did they do, and what barriers did they face? A public forum brought more than 30 experts together to discuss the benefits, opportunities, and barriers to groundwater recharge. The event was hosted by the California State Board of Food and Agriculture and the state Department of Water Resources.

My presentation focused on recharge in the San Joaquin Valley—a region that is home to more than four million people, half the state’s agricultural output, and most of its critically overdrafted groundwater basins, where pumping exceeds replenishment. Consequences include dry wells, sinking lands, and reduced supplies to weather future droughts. … “

Click here to continue reading at the PPIC Blog.