“The public will have an opportunity to learn about local implementation of the Sustainable Groundwater Management Act (SGMA) in the Sierra Valley Basin at a workshop Thursday, Oct. 25, from 6 to 8 p.m., at Sierra Christian Church, 81059 Highway 70, in Beckwourth. … “

Johnson said that given the Groundwater Authority’s tight timeline to complete and submit the sustainability plan, Stetson Engineers will be pursuing an aggressive schedule to get components done. … ”

“Health and safety concerns became a topic of discussion at Thursday’s Indian Wells Valley Groundwater board meeting when Ridgecrest resident Nick Panzer broached the subject.  Speaking during public comment, Panzer presented a letter to board addressing possible water allocations down the road as the Groundwater Authority prepares its sustainability plan.

“A Santa Clara County jury served four Paso Robles-area government agencies a victory in court on Sept. 24, concluding in a unanimous ruling that those public water purveyors had established a right to pump from the Paso Robles Groundwater Basin—even in adverse conditions, like a drought.

After a month-long trial stemming from a 2013 lawsuit filed by private landowners, the jury ruled that the agencies—San Luis Obispo County, the city of Paso Robles, Templeton Community Services District (CSD), and San Miguel CSD—successfully proved that they’d established overriding rights to basin water between 1981 and 1990, when the aquifer was in a state of overdraft. … ”

California Leans Heavily on its Groundwater, But Will a Court Decision Tip the Scales Against More Pumping?

“In 1983, a landmark California Supreme Court ruling forced Los Angeles to cut back its take of water from Eastern Sierra creeks that fed Mono Lake. Some 35 years later, an appellate court concluded the same public trust doctrine that applied in the Mono Lake case also applies to groundwater that feeds a navigable river in a picturesque corner of far Northern California. But will this latest ruling have the same impact on California water resources as the historic Mono Lake decision?”

Read more from Western Water here:  California Leans Heavily on its Groundwater, But Will a Court Decision Tip the Scales Against More Pumping?

Why California law requires a clear benefit for groundwater recharge

“Researchers at the University of California recently highlighted a flaw in state law that may prohibit diverting streamflow to recharge groundwater. The problem is that groundwater recharge by itself is not considered a “beneficial use” under state law, and meeting that definition is a requirement to obtain a permit to divert water.

Officials at the State Water Resources Control Board, which oversees water rights, say the reality is not so clear-cut. In fact, existing rules allow most groundwater recharge projects to obtain a water right. It’s just that they may not be awarded that right for the act of recharge by itself. The applicant would have to specifically target some ancillary benefit of recharge, such as salinity control in an aquifer or reversing land subsidence caused by overpumping groundwater. … ”

The Groundwater Authority board will have a light agenda, including a report from Steve Johnson, the water resources manager and president of Stetson Engineers.  Johnson’s report will include discussion of the Groundwater Authority’s Plan of Action and Milestones, which serves as the agency’s roadmap in developing the Groundwater Sustainability Plan, as well as topics including the status of a Proposition 1 grant application, and updates on the pumping fee status and schedule. … ”

“As local agencies tackle the task of writing groundwater sustainability plans for basins around California, two ongoing processes will affect both the number and the scope of those plans.

Next month, the state Department of Water Resources plans to finalize its rankings of basins and sub-basins that will need to produce groundwater management plans by early 2022. Next spring, DWR plans to finalize boundaries for 43 basins where local agencies requested changes before writing their plans.

Meanwhile, agencies overseeing critically overdrafted basins must have their sustainability plans finished in about 15 months—by Jan. 31, 2020. … “

The Connection between Groundwater and Surface Water

From the PPIC Blog:

“When the California Legislature created the “modern” water rights regulatory system more than a century ago, it focused exclusively on surface water, exempting groundwater from the permitting system. Yet in most watersheds, surface water and groundwater are closely linked. Actions that change one often have an impact on the other. The arbitrary legal divide has made it harder to manage the state’s water. But a recent law and a new court decision have done a better job of connecting surface water and groundwater.

When rain falls or snow melts in the foothills and mountains of California, water follows several pathways downhill and into rivers and streams. Some water moves across the land or through deep soils and weathered bedrock, arriving in rivers hours to weeks after rain or snowmelt. And some percolates deep into the ground, becoming groundwater. … “

Read more from the PPIC blog here: The Connection between Groundwater and Surface Water

Data shows groundwater recharge in the region has declined by 1.1 MAF since 2000; storage remains at unhealthy levels 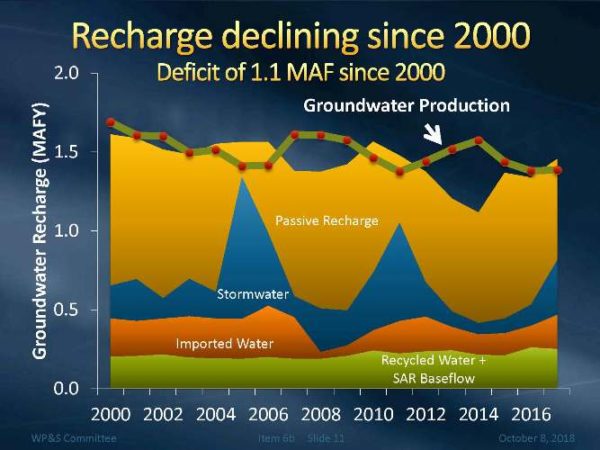